Responsibility to protect: the “liberation” of Sirte 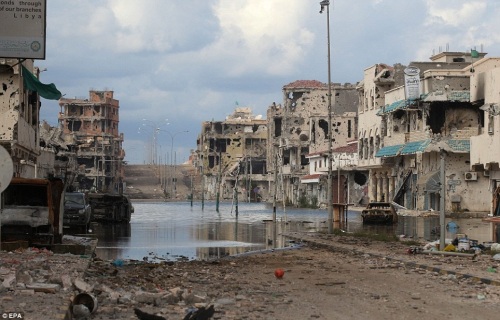 According to NATO  figures, coalition aircraft delivered 415 key strikes on the town of Sirte between Sunday 28th August and Thursday 20th October. We have compared this to the bombing of Guernica and other comparisons have been made to the widely condemned levelling of Grozny.

In addition, the rebels, described in NATO circles as a ‘proxy army” were allowed by NATO to indiscriminately shell the town with tank fire, heavy mortar fire and artillery. Here is some footage from the ‘Information Office of the Misrata Mujahid Battalion’ to illustrate the point:

Indiscriminate attacks on Sirte by tank artillery and mortar fire

And here is more footage, taken in September, showing heavy mortar and rocket fire into the town. It is crystal clear that NATO, who were patrolling the skies above and bombing the town, purportedly to protect civilians, were making no attempt to protect the civilians of Sirte from this indiscriminate use of heavy weaponry:

NATO has declined to comment on why it did nothing to protect the civilians of Sirte and why it has been complicit in these war crimes.

As rebel infantry moved in on the destroyed centre of Sirte, the footage below shows that the civilian infrastructure of Sirte, including its buildings, water and sanitation systems, had been totally destroyed:

The liberation of Sirte

And here is more footage of the town showing the extent of the destruction, it appears from this video that every building has been targeted in a systematic attempt to ensure the town is uninhabitable:

In what should be the final death-blow to the notion that NATO air power combined with undisciplined and in some cases genocidal mobs supplied with NATO weaponry on the ground can effectively ‘protect’ a civilian population it has become clear that fifty-three people were summarily executed by the rebels in the garden of the Mahari hotel in Sirte.

Ironically the bodies were found by Peter Bouckaert, emergencies director at Human Rights Watch. Some of the bodies had their hands bound behind their backs when they were shot. In addition, some of the bodies had bandages over serious wounds, suggesting they had been treated for other injuries prior to being executed, a stark reminder of the earlier murderous rampage of the rebels through the Abu Saleem hospital in Tripoli.

Some of the victims had been in Ibn Sina Hospital in Sirte, after being treated for injuries – the same hospital which was treating the children with the horrific injuries we covered in an earlier report.

Meanwhile, Red Cross officials have said they have found two hundred and sixty-seven dead in Sirte, most of whom they believe were killed late on Thursday – the day of liberation.

Bodies of victims in Sirte

As HRW point out, violence and murder, inflicted during an armed conflict on combatants who have laid down their arms or are in detention, is a war crime under the Rome Statute of the International Criminal Court (ICC). The ICC has jurisdiction in Libya for all crimes within its mandate committed since February 15, 2011. Under the court’s treaty, criminal liability applies to both those who physically commit the crimes and to senior officials, including those who give the orders and those in a position of command who should have been aware of the abuses but failed to prevent them or to report or prosecute those responsible.

“This latest massacre seems part of a trend of killings, looting, and other abuses committed by armed anti-Gaddafi fighters who consider themselves above the law.”

The ICC prosecutor has not pursued action against pro-NATO forces, in fact he has been involved in spreading propaganda and inciting racial hatred during the conflict. Furthermore, the NTC leadership are deeply implicated in the attacks on the civilian population of Sirte. Mustafa Abdel Jalil visited the brigades laying siege to the town on 11 October and declared that:

”You have the support of all the members of the transitional council.”

In addition, Mahmoud Jibril infamously gave the green light to the permanent ethnic cleansing of Tawergha by the Misrata brigades at a meeting in Misrata Town Hall.

Currently what is left of Sirte is being thoroughly looted  – with flat-bed trucks loading up cars and personal possessions to take back to Misrata.

Meanwhile, according to the BBC’s Wyre Davies reporting from Sirte, the town will be the last in Libya to be reconstructed or may not be rebuilt at all “but instead left in its destroyed crumbling state as a memorial to Colonel Gaddafi’s victims.”

The Responsibility to Protect

It is clear that the ‘responsibility to protect’ (R2P) doctrine has been hi-jacked by NATO and its supporters as a justification for its military campaigns and has lost its humanitarian content, becoming little more than a weapon in the propaganda war to draw ill-informed citizens into consent for military action.

A genuine responsibility to protect (GR2P) needs to protect people from the ravages of war, in which the most egregious human rights violations usually occur, and needs to be particularly conscious of R2P as a reincarnation of the “white man’s burden” and as justification for NATO imperialism and military adventurism.