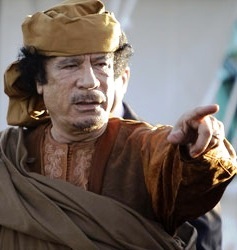 The Future Gaddafi Foresaw: Libya, ISIS and the Unaffordable Luxury of Hindsight

“Who are you?” the late Muammar Gaddafi once rhetorically asked in a famous speech of his towards the end of his reign; (rightly) questioning the legitimacy of those seeking to over-throw his government at the time, calling them extremists, foreign agents, rats and drug-addicts.

He was laughed at, unfairly caricatured, ridiculed and incessantly demonized; a distasteful parody video poking fun at the late Libyan leader even went viral on social media; evidently the maker of the video, an Israeli, thought the Libyan colloquial Arabic word “Zenga” (which means an Alleyway) sounded funny enough that he extracted it from one of Gaddafi’s speeches, looped it on top of a hip-hop backing track and voila… he got himself a hit video which was widely (and shamefully) circulated with a “revolutionary”…

Posted on March 19, 2015 by libyanfreepress 2 Comments