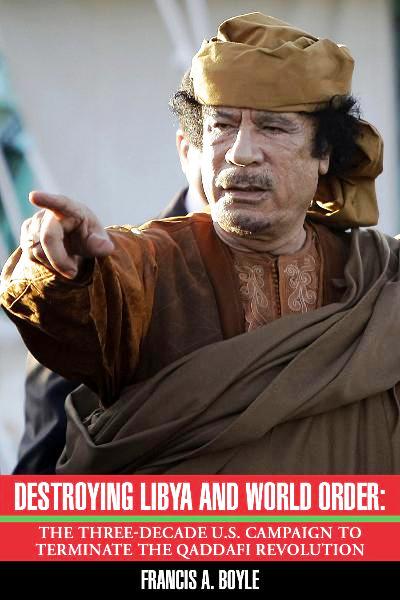 by Francis A. Boyle

FRANCIS A. BOYLE is a leading American expert in international law. He was responsible for drafting the Biological Weapons Anti-Terrorism Act of 1989, the American implementing legislation for the 1972 Biological Weapons Convention. He served on the Board of Directors of Amnesty International (1988-1992), and represented Bosnia-Herzegovina at the World Court. He served as legal adviser to the Palestinian Delegation to the Middle East peace negotiations from 1991 to 1993. In 2007, he delivered the Bertrand Russell Peace Lectures. Professor Boyle teaches international law at the University of Illinois, Champaign and is author of, inter alia, The Future of International Law and American Foreign Policy, Foundations of World Order, The Criminality of Nuclear

I have unique experience in Libya. To the best of my knowledge, during the
1980s I was the only American professor to spend time in Libya because of
the serial armed hostilities and the imposition of draconian travel prohibitions
and economic sanctions inflicted by the Reagan administration. I spent a sum
total of four weeks in Libya on three different trips there during that decade.

In 1985 Libya invited me to conduct a two-week lecture tour and visit of that
country. I lectured at universities in Tripoli and Benghazi. I also lectured live
on Libyan national television from their studio in Tripoli, and some of my
public lectures were broadcasted by Libyan television.

During my first trip to Libya, I spent an entire day visiting their museum
dedicated to the documentation of the Italian Holocaust that was perpetrated
upon them. In 1911 Italy attacked and invaded the territory we now call Libya
and proceeded to occupy it until near the end of the Second World War.
During this period of time, Italy exterminated about 100,000 Libyans, nearly
one-third of its population. These victims included the Italian murder of Libya’s
acclaimed national liberation hero and martyr Omar Muktar.

At their request, I would later advise Libya on how to sue Italy over their
colonization and outright genocide against the Libyans. Protracted
negotiations between Libya and Italy eventually led to a settlement of those
claims that was concluded between Colonel Qaddafi and Prime Minister Sylvio
Berlusconi in 2008 providing for a $5 billion dollar compensation package to
be transferred to Libya over twenty years. But that agreement was
treacherously repudiated by Berlusconi during the course of his 2011 war
against Libya. Berlusconi’s illegal and despicable act re-opened Libya’s
claims for colonization and genocide against Italy.

During my first trip to Libya, I was surprised to see women free and
empowered to do anything they wanted all over the country. I asked my
government-provided translator about this: “Qaddafi decreed that women are
equal to men. The old men don’t like it. But there is nothing they can do about
it.” As I can attest from my three trips to Libya, under Qaddafi women held up
half the sky in that country. I doubt very seriously that the 2011 US/NATO war
will advance the cause of women in Libya. Indeed, Libyan women could very
well retrogress from Qaddafi’s days.

In 1987 I returned to Libya for another two weeks after the Reagan
administration had bombed Tripoli and Benghazi in 1986 and attempted to
murder the entire Qaddafi family sleeping in their home at night. I visited all
the bombing sites in the Metropolitan Tripoli area and had a tour of the
bombed out Qaddafi home. I then had a meeting with Colonel Qaddafi in his
tent where we discussed what happened to him and his family on the night of
the bombing. Qaddafi was a Bedouin from the desert, so he liked to meet
guests and conduct business in a pitched tent.

At the end of that meeting I agreed with Colonel Qaddafi to work with former U.
S. Attorney General Ramsey Clark on filing lawsuits in United States federal
courts over the bombings against President Reagan, Secretary of Defense
Weinberger Director of the C.I.A. Casey, the U.S. Joint Chiefs of Staff, the U.
S. Commander of NATO, the Commander of the U.S. Sixth Fleet, and U.K.
Prime Minister Margaret Thatcher — who gave permission to Reagan to use a
U.K. base where U.S. bombers were stationed to bomb Libya — together with
suing both the United States and the United Kingdom. We lost. Two lawyers
against two empires.

In June of 1988 I returned to Libya as their guest in order to attend the
session of their Basic Popular Congress meeting in Beida for the adoption of
the Great Green Charter for Peace and Human Rights. Interestingly enough,
Colonel Qaddafi proposed to abolish the death penalty for Libya. But the
Basic Popular Congress rejected his humanitarian initiative: Democracy in
action! While there I also provided commentary to C.B.S. Evening News about
what precisely was going on and its significance.

Over the years, I would routinely give interviews to Western news media
sources about Libya and the prospects for the United States government to
overthrow Colonel Qaddafi. I always pointed out that the American
government should be careful of what it wished for: Instead of installing a C.I.
A. stooge, the United States could get an “Ayatollah” sitting on top of Libya’s
oil fields and occupying that strategic piece of real estate in North Africa and
on the southern rim of the Mediterranean right next to Egypt. Colonel Qaddafi’
s foremost opponents had always been Libya’s Muslim fundamentalists who
detested him for (1) his secular-nationalist rule deliberately modeled upon his
hero and role model, Egypt’s Gamal Abdel Nasser; (2) his liberation and
empowerment of Libyan women; and (3) Qaddafi’s Green Book that tried to
carve-out a third way between capitalism and communism that was consistent
with Islam, but which they nevertheless considered to be heretical. For the
most part, Libyans constitute a devout but moderate Sunni Muslim population.
Yet in order to overthrow Qaddafi in 2011, the U.S. and NATO states worked
hand-in-glove with Libyan and foreign Muslim fundamentalists including
elements of Al Qaeda. Iran on the Med, anyone?

After the Bush Senior administration came to power, in late 1991 they
opportunistically accused Libya of somehow being behind the 1988 bombing
of the Pan American jet over Lockerbie, Scotland. I advised Libya on this
matter from the very outset. Indeed, prior thereto I had predicted to Libya that
they were going to be used by the United States government as a convenient
scapegoat over Lockerbie for geopolitical reasons.

Publicly sensationalizing these allegations, in early 1992 President Bush
Senior then mobilized the U.S. Sixth Fleet off the coast of Libya on hostile
aerial and naval maneuvers in preparation for yet another military attack
exactly as the Reagan administration had done repeatedly throughout the
1980s. I convinced Colonel Qaddafi to let us sue the United States and the
United Kingdom at the International Court of Justice in The Hague over the
Lockerbie bombing allegations; to convene an emergency meeting of the
World Court; and to request the Court to issue the international equivalent of
temporary restraining orders against the United States and the United
Kingdom that they not attack Libya again as they had done before. After we
had filed these two World Court lawsuits, President Bush Senior ordered the
Sixth Fleet to stand down. There was no military conflict between the United
States and Libya. There was no war. No one died. A tribute to international
law, the World Court, and their capacity for the peaceful settlement of
international disputes.

It took three decades for the United States
government—spanning and working assiduously over
five different presidential administrations (Reagan,
Bush I, Clinton, Bush II , and Obama)—to terminate the
1969 Qaddafi Revolution, seize control over Libya’s oil
fields, and dismantle its Jamahiriya system. This book
tells the story of what happened, why it happened, and
what was both wrong and illegal with that from the
perspective of an international law professor and
lawyer who tried for over three decades to stop it.

Francis Boyle provides a comprehensive history and
critique of American foreign policy toward Libya from
when the Reagan administration came to power in
January of 1981 up to the 2011 NA TO war on Libya that
ultimately achieved the US goal of regime change, and
beyond.

He sets the record straight on the series of military
conflicts and crises between the United States and
Libya over the Gulf of Sidra, exposing the Reagan
administration’s fraudulent claims of Libyan instigation
of international terrorism put forward over his eight
years in office.

Boyle reveals the inside story behind the Lockerbie
bombing cases against the United States and the
United Kingdom that he filed at the World Court for
Colonel Qaddafi acting upon his advice—and the unjust
resolution of those disputes.

Deploying standard criteria of international law, Boyle
analyzes and debunks the UN R2P “responsibility to
protect” doctrine and its immediate predecessor,
“humanitarian intervention”. He addresses how R2P
served as the basis for the NATO assault on Libya in
2011, overriding the UN Charter commitment to
state sovereignty and prevention of aggression. The
purported NATO protection in actuality led to 50,000
Libyan casualties, and the complete breakdown of law
and order. And this is just the beginning. Boyle lays out
the ramifications: the destabilization of the Maghreb
and Sahel, and the French intervention in Mali—with
the USA/NATO/Europe starting a new imperial scramble
for the natural resources of Africa.

This book is not only a classic case study of the
conduct of US foreign policy as it relates to
international law, but a damning indictment of the
newly-contrived R2P doctrine as legal cover for
Western intervention into third world countries.

Chapter 2.
The Confrontation Between the Reagan
Administration and Libya
over the Gulf of Sidra and Terrorism

Chapter 3.
The Reagan Administration’s Criminal Bombings
of Tripoli and Benghazi

Chapter 4.
Resolving the Lockerbie Dispute by Means of
International Law.