Murder of two foreigners, in western occupied Libya, because of New Year celebration 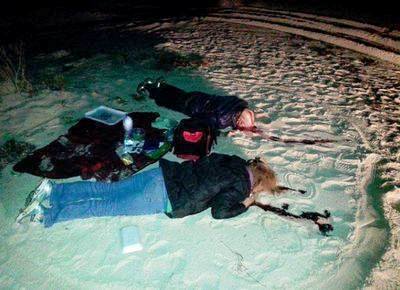 Photo from the scene , clearly visible streams of blood on the sand that flowed from the cut throat of each victim . The woman’s head was slightly shifted before she was shot , it was probably a reflex action of the dying , so near her head 2 stream of blood, head of man remained in the same place .

The murder of two foreigners in western Occupied Libya: Execution because  of  New Year celebration.

Near the foreign employees compound of the refinery complex “Mellita” in Sabratha, two people were found dead. One a man from Britain, and a woman from New Zealand. They were slaughtered at the scene of the New Year picnic they had arranged near the beach. Their personal belongings were not stolen.

Their names did not appear in the news report, the only information given was that both were teachers in Tripoli. The official version, which was circulated by the puppet regime of Libya, reported that they were shot . But a large amount of blood that was flowing through a creek in the sand suggests that their throats were cut. It was a penalty for infidels because of the New Year’s celebration at the new Emirate of Al -Qaeda – the former Libyan Jamahiriya.

With this ritual throat-slitting, a resident of Britain received the freedom that his government and the army brought to Libya. But the woman was from New Zealand, and a pity she was not spared.

If members of Al -Qaeda had more time or desire , these two would have been raped.

These are not the first foreign teachers killed in Libya; before was killed a Chemistry teacher from USA in Benghazi.

After the overthrow of the legitimate government of Libya and install a puppet regime by NATO,  rapes , tortures and executions have become commonplace in the occupied state .

By enabling NATO in Libya power of gangs  they keep the country in a constant state of chaos and terror .

The same chaos and terror they try to create in Syria and Ukraine.

This entry was posted in Sabratha and tagged murders, Sabratha, western occupied Libya. Bookmark the permalink.