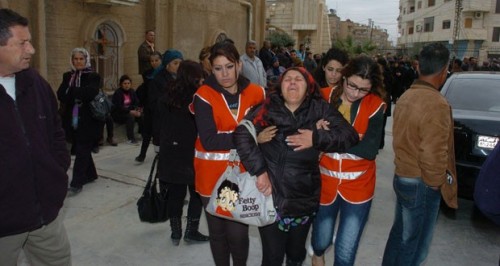 Families fleeing ISIS arrive in Hasaka city, concerns raised over fate of locals who stayed behind

Hasaka, 24/2/2015 ~ Terrorists of the DAESH (ISIS) captured 56 people from the villages of Tal Hermez, Tal Shamiram, located in the surrounding of Tal Tamr town in the countryside of Hasaka, northeastern Syria.

Local sources in the area who spoke to SANA reporter said ISIS terrorists held captive at least 56 of the two villages’ residents and took them to an unidentified area.

Scores of families who fled the terrorism of ISIS in Hasaka province gathered in the courtyard of the Assyrian Church in Hasaka city, and the prevailing feelings around them are sorrow over what happened in their hometowns and fear for those who stayed behind.

Janet Dankha, one of the survivors, said that she was lucky to arrive safely in Haska, adding “an unknown and…