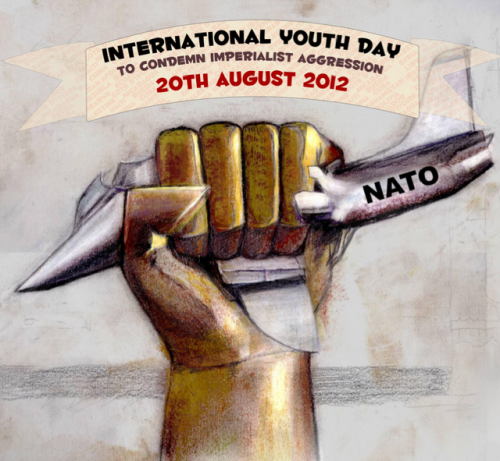 August 20th 2011 is the date that the North Atlantic Terrorist Alliance (NATO) began its onslaught on Tripoli, Libya, to bomb mercenaries from that country, Qatar, Jordan, Afghanistan and other parts of the wider region into the capital, lead by NATO special forces.

That date was covered by the western and GCC corporate media as the date that Libya was being “liberated”. The reality is that in Tripoli alone, in just 12 hours, the Jamahiriyah’s Ministry of Health, reported that 1,300 people had been killed and thousands injured. The following 5 days of intensive bombardment were nothing less then a bloodbath. During those days and up until this date, NATO forces and their proxies on the ground (perversely labeled as “freedom fighters”/”revolutionaries” by much of the international media) have systematically persecuted, murdered, tortured and imprisoned anyone who resists their agenda.

This date is a date for youth around the world to engage with each other on the basis of solidarity with their brothers and sisters who are suffering the most brutal effects of imperialist aggression, whether it be in Libya, Iraq, former Yugoslavia and Afghanistan which have been ravaged by NATO’s bombing campaigns; Syria which every day is losing more and more of its children to mercenaries that are being armed and financed by NATO powers, Sudan, Somalia and many other African countries which have been divided and continue to suffer long term sectarian war as a result of long term imperialist meddling, Colombia where millions live as internal refugees because of persecution by the Bogota US puppet Government, Puerto Rico, which remains a US colony, Haiti which has been punished by imperialist powers almost since the moment it established itself as the first Black Republic in the early 19th century, Palestine which has suffered more than 60 years of ethnic cleansing and European settler colonialism, Pakistan, where almost every day lives are lost to US drones….and the list goes on.

The idea for such an international event was conceived in Nicaragua, which lost over 50,000 people to a US proxy war against the revolutionary FSLN government in the 1980s, in addition to centuries of imperialist military and economic interference (including colonial occupation) that have lead to its current status as the poorest country in the Americas after Haiti. Since 2007, the FSLN has been back in power, and the idea of such a date is to maintain a high level of consciousness amongst Nicaraguan youth about the effects of imperialist aggression, by highlighting on this date such aggressions that continue in other parts of the world.

As well as raising consciousness, the idea of this date is for youth around the world to engage with each other and build up an anti-imperialist network amongst themselves.

In Nicaragua, an event will be organized on this date with young people, where this year’s theme will be Libya and Syria. The format of the event will be three or four expert speakers, followed by a question and answer session for the audience, but particularly youngsters in the audience, to engage with, and cultural performances (e.g. music, poetry etc) by young artists, thereby also giving them a platform to share their talents. The event will be filmed and shared online.

We encourage friends across the world to organize a similar such event, with a theme of your choice, although it is important that this date is also marked as the invasion of Tripoli in an effort to destroy the perverse narrative that this was the date that Tripoli was liberated. It is vital that all events are filmed and shared online so youth around the world can see that their counterparts are engaged in similar activities and as a basis for them to begin engaging and communicating with each other. Also, even if the audience present at the event is small, sharing videos of the events will maximise the potential audience for these events.

We already have confirmation that friends in London and Chicago, US, will be organizing sister events.

Posted on August 15, 2012 by libyanfreepress 4 Comments