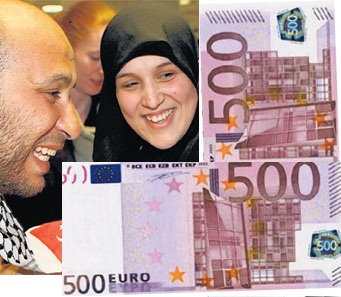 Mahdi al-Harati and the Irish wife

BATTLEZONE: Mahdi al-Harati helped to lead the assault on Tripoli which ultimately resulted in the fall of Sirte.

A GANG of Irish traveller thieves are in the middle of a holy war – after liberating €200,000 cash destined for Libyan ‘rebels’. In a tale worthy of the John le Carre thriller Tinker, Tailor, Soldier, Spy, the scam artists from Rathkeale in Co Limerick hit the jackpot when they robbed a home in Dublin’s Firhouse.

As well as a haul of family jewels, they stumbled upon €200,000 in €500 bills hidden in the hot press. But the homeowner was well-known Irish Libyan ‘freedom fighter’ Mahdi al-Harati, who was one of the leaders of the bloody ‘revolt’ against Gaddafi.

He has told cops that the cash was a gift from US secret agents to aid the war effort in Libya. Now the money trail has led to the traveller strongholds in Rathkeale, where €500 notes have been popping up all over the place.

A gang of rogue Irish travellers is in the frame for the bizarre robbery of €200,000 in cash donated by US spies to Libyan ‘freedom fighters’. In an astonishing tale worthy of the John le Carre novel Tinker, Tailor, Soldier, Spy, the cash that was destined for rebels fighting Colonel Gaddafi’s forces was stolen from a hot press in a Dublin house.

Gardai are now investigating the extraordinary robbery which is being blamed on a traveller gang from the Limerick town of Rathkeale. An Irish freedom fighter who helped bring down Gaddafi’s hated regime in Libya has claimed that €200,000 cash stolen from his Dublin home was given to him by an American intelligence agency.

The Sunday World can reveal that gardai are investigating the robbery of two envelopes containing €200,000 in €500 notes from the home of Mahdi al-Harati in Firhouse, south Dublin, and that the money trail is leading to the Rathkealers. Al-Harati was in Libya following the successful campaign that toppled Gaddafi when the rebel’s house was broken into on October 6.

BATTLEZONE: Mahdi al-Harati helped to lead the assault on Tripoli which ultimately resulted in the fall of Sirte.

His Irish wife, Eftaima al-Najar, received a phone call from a local school informing her that one of her four children had a badly injured leg and had been taken to Tallaght Hospital. Eftaima spent a number of hours in the Accident and Emergency department and when she returned home and opened the front door, she realised the house had been broken into. Her house had been ransacked and a substantial amount of expensive Libyan and Egyptian jewellery had been taken from the couple’s bedroom.

The hot press had also been emptied and she immediately phoned gardai at Tallaght Garda station and reported the robbery. When detectives arrived at the scene, Eftaima told them that her husband had left a substantial amount of cash with her before he went to Libya. She said she had hid the money in the hot press in two envelopes and estimated that they contained €200,000.

Astonished officers made contact with Mahdi al-Harati who told them that he had travelled to France, the United States and Qatar the previous month and that representatives of an American intelligence agency had given him a significant amount of money to help in the efforts to defeat Gaddafi. He said he left two envelopes with his wife in case he was killed and took the rest of the cash with him when he went back to Libya.

The couple had no comment to make when the Sunday World called to their home last week. Al-Harati led the main rebel advance that captured Tripoli on August 21, a move regarded as being the beginning of the end for Gaddafi. He was appointed deputy leader of Tripoli’s military council, a group which had the aim of merging all rebel units into one coherent national army.

Just days after the robbery in his home, al-Harati resigned from the council and returned to Dublin and has since been formally interviewed by gardai. Astonished detectives have launched a major probe into the daring robbery and issued an alert to all banks to be on the lookout for €500 notes, which are extremely rare in Ireland but would be relatively common in other European countries.

Officers were then stunned when it emerged that members of a well-known traveller gang from the well-known town of Rathkeale in Limerick had lodged a number of €500 bills into their bank accounts. The gang are known to have carried out dozens of burglaries of houses across south Dublin in recent months.

Gardai believe the gang happened upon the home of al-Harati and his wife by chance and had no idea of the massive cash windfall they would find when they broke in. The garda probe into the robbery is ongoing and officers are confident that they will make arrests in the case.

A number of rogue traveller gangs operate out of the small Co Limerick town which has become famous for the annual homecoming. Every Christmas the high rollers return from dubious trading jaunts around Europe in fleets of brand new cars worth hundreds of millions. They stay for several weeks for a legendary “wedding season” before heading out on the road in the new year. Al-Harati and his wife are cooperating fully with the investigation. The 37-year-old teaches Arabic in Dublin. He came to Ireland over two decades ago and met his Irish-born wife here. Her father was born in Libya and her mother is Irish. She changed her name and religion when the couple met.

Posted on November 9, 2011 by libyanfreepress 5 Comments