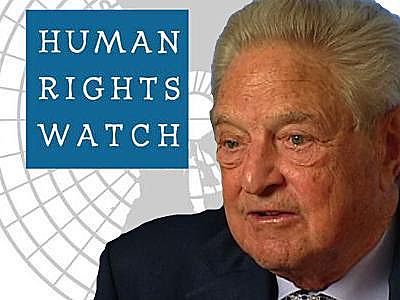 In a recent article, I explained how Human Rights Watch proceeds to mislead public opinion. Today, another proof came out in the medias. And today, they’ve reached another level. The ultimate level of deception.

Indeed, today HRW claims that rebels executed 53 Gaddafi loyalists. The corpses were found in Hotel Mahari in District 2 of Sirte. On Russia Today’s article, we can read:  “the group considers the accident to be part of the murders and lootings from some opposition forces that do not want to obey any law at all. HRW calls for Libya to get these people under control”

Well, there are several interesting things to point out about HRW and its apparently UNEXPECTED DISCOVERY of loyalists being executed.

Since day 1, reports from many independent sources that were part of fact-finding missions in Libya, confirmed that the rebels where slaughtering civilians just because they supported Muammar Gaddafi; or just for being “Black” (Lizzie Phelan, Mahdi Nazemroaya, Sukant Chandan, Franklin Lamb, …) Where were HRW people at the time ? Oh true, at that time, they were comfortably sitting in their European offices, reporting about Gaddafi’s crimes… Gaddafi’s crimes that NEVER TOOK PLACE and that none of the Nato members succeeded to prove until date. Seems like mainstream media doesn’t care since they’re not talking about this crucial point anymore (that contributes in making this War totally unjustified and unlawful). Nor does HRW. Correction: They’ve never talked about it actually.

On top of spreading fake reports, HRW has apparently been granted with an additional mission by Nato member states: Besides misleading public opinion by demonizing Gaddafi by providing fake information, they now have to cover up Nato crimes. When the White Empire’s most powerful army in the history started dropping thousands of bombs full of depleted uranium on the innocent civilians of Libya, HRW remained totally silent. Instead of reporting about the ongoing Crimes Against Humanity being carried out by its masters and funders, it shifted public opinion’s focus on Syria in order to demonize Bashar Al Assad’s regime by providing, once again, fake information.

Today, it has reached another level. The ultimate stage of deception. With its above mentioned report (You can click HERE) of loyalists being executed they’re misleading public opinion again. And covering up one of the worst atrocities of our decade (We don’t forget about Iraq, Afghanistan, Palestine, Lebanon, Pakistan. But today we’re focusing on their role in the Libyan War)

HRW assumes that this execution was carried out by “anti Gaddafi fighters from Misrata” and calls “on Libya’s National Transitional Council (NTC) to conduct an immediate and transparent investigation into the apparent mass execution and to bring those responsible to justice”.

1. Well, this simple extract is enough for HRW to wipe away NTC’s accountability in this mass killing. But wait… I thought the Misrata fighters were controlled by the NTC… Yes, so NTC is accountable for these executions. Well, they apparently aren’t anymore… So, some random fighters from Misrata, nobody knows who they are, are to be blamed and punished for it… What a great example of JUSTICE!

2. Why didn’t HRW call on Gaddafi to conduct an immediate and transparent investigation into the apparent killing of civilians and to bring those responsible to justice? Instead of calling for a UN resolution that led to Nato intervention? Well, if today we cannot hold NTC accountable for hideous mass killings from its own “freedom fighters” especially with blatant proofs then why could we hold Gaddafi accountable ? Especially without any proof….

3. On top of that, by focusing on these 53 loyalists (Peace be upon them) HRW is covering up a much more important killing, we can even call it a Crime Against Humanity. The one carried out by Nato. If HRW found those 53 corpses in Sirte, how couldn’t it see the civilian corpses laying all over the city ? And all over the country. Couldn’t HRW see the massive destruction of civilian infrastructure, residential areas, schools, water pipes, electricity plants in the very same city? Are they blind ? No, they aren’t. And they saw the chaos that Nato brought about. And they very well know that thousands of civilians must have died since Nato’s primary targets were civilian infrastructures.

4. Why didn’t HRW expose that each Tomahawk, like the ones dropped on Libya, contains 300Kgs of depleted uranium ? Why didn’t it exposes the use of cluster bombs ? Why don’t they focus on estimating the civilian deaths brought about by NATO ? Especially when estimations from independent sources are about 60’000 innocents dead. Maybe because those sources are not reliable enough… But those claiming that Gaddafi sent his Air Force to bomb his population were apparently more reliable… (please check this link: Russia Intel satellite shows Gaddafi did not attack his people )

5. Why didn’t HRW exposed Nato members providing heavy weapons and artillery to the rebels in complete breach of UN resolution?

6. Why didn’t HRW expose the fact that what mainstream media and western leaders were today calling Rebels or Freedom Fighters, were once called Al Qaeda terrorists ?

So many questions… And all answers lead to the same point. That HRW is absolutely not about Human Rights.

HRW, NATO, UN and other international organizations no longer benefit from their beautiful image of FREEDOM and JUSTICE  lovers. Everyday brings its loads of proofs that all those organizations are nothing more than smoke screens to cover up White Empire hideous crimes and world enslavement.

I call on you, people, to spread this article, and all other articles of interest that you might find on our website and on other websites. Spread the truth. Expose the traitors. Expose the liars. Expose the crimes. Don’t remain silent and idle while our leaders take us, everyday, a step closer to the Global Chaos.

This entry was posted in + All - Archivio, Crimes against humanity, Human Rights Watch, NATO, Soros. Bookmark the permalink.

One response to “HRW works for NATO”