Shocking Brutality: the Nato/Al-Qaeda “freedom-fighters” will bring you democracy 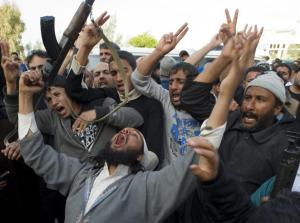 Shocking brutality by the  Nato-Al-Qaeda “freedom-fighters”

Nothing defines the post-Gaddafi National Transitional Council (NTC) regime better than the shockingly brutal manner in which Colonel Moammar Gaddafi was literally beaten to death after his capture on Thursday in Sirte. To reiterate the cliché that all is fair in love and war in this context is no comfort. The reports and footage of Gaddafi’s last moments are nothing short of hair-raising. This was a barbaric act in the extreme. With its usual expedient blinkers where its interests are concerned, the west, whether governments or the media, have tucked away their moral compass somewhere out of sight and convenient. The NTC pro-west regime they are triumphantly supporting is less likely to be, as the Libyan Ambassador in London claimed, a state ruled by law so much as a western imperialist satrap. Given that this treatment of a captured leader was not the first manifestation of the brutality of the NTC fighters (note the violence perpetrated against unarmed migrant African workers captured by the NTC and accused of being Gaddafi mercenaries without any proof), what is the explanation for this barbarism?

The NTC forces include al Qaeda affiliated groups who have been trying to overthrow Gaddafi through armed uprisings (especially in eastern Libya) over the years. Ironically, the very west that claims to be fighting al Qaeda worldwide turned a convenient blind eye to the troubling inclusion of these extremist jihadi groups in the NTC ranks. One faction of these al Qaeda affiliates was held responsible for the murder of a Gaddafi regime senior general who defected to the rebels and was leading their military campaign. Yet to date, no one has been held accountable for this murder. Libya presents the picture of the pattern likely to be used by the west from now on to take out regimes that oppose its imperialist ambitions. The model is to use local dissident or rebellious forces on the ground, supported by the US and Nato’s overwhelming technological superiority in air power, missiles and other ‘remote’ weapons to help crush regimes that do not play ball with the west. US President Obama boasted after Gaddafi’s brutal end was confirmed that not one American life had been lost in the Libyan campaign. What he conveniently forgot to mention was the role of covert special forces attached to the NTC rebels that arguably helped and directed their relatively amateur military efforts. Obama’s triumphalism pulled whatever thin fig leaf was put up by Washington under the rubric ‘leading from behind’.

Like in any detective novel, the two critical questions to be asked are: motive, and beneficiary, to determine the villain of the piece. Libya’s oil and gas riches are what the US-led west has been slavering over for a very long time. Gaddafi’s support to anti-imperialist movements worldwide earned him more than a fair share of the ire of the powers that be in our (still) post-Cold War unipolar world. France and Britain, that led the anti-Gaddafi pack, are licking their lips over the lucrative ingress they have gained through bringing the NTC to power into Libya’s oil and gas. As in Iraq, energy sources and imperialist intervention have a symbiotic relationship.

It may be too close to these horrific events to judge Gaddafi’s place in history. However, a few tentative conclusions can be tendered even now. Colonel Gaddafi’s coup in 1969 that overthrew the decrepit monarchy and established a popular Arab nationalist regime openly declared its support of all anti-imperialist movements in the world. Sometimes, his uncompromising stances and criticism of other third world countries that betrayed their ostensible support to such movements because of ties to, and pressure from, the west, invited retaliation and even relative isolation for Gaddafi. He was however, undeterred for a very long time. It is only when the west was able to orchestrate a virtually total isolation of Libya because of the Lockerbie bombing and other incidents, that Gaddafi attempted to compromise with the west. He gave up his nuclear ambitions, support for already dwindling anti-imperialist movements, and tried to craft an acceptable modus vivendi with the western powers. However, if there is one lesson to be drawn from his fate, it is that empires have long memories and are totally ruthless in achieving their goals. Gaddafi joins a long list of the victims of the rapacious greed and domineering imperialist ambitions of the west that litters the history of the modern world. Rest in peace Colonel. *

Hillary Clinton is the talk of the town on her current sojourn in Islamabad. This time she comes with warnings. Her message is that Pakistan has to decide whether it would help or hinder the US-led war on terror and that the US would continue pursuing the terrorists in the region with or without Pakistan’s engagement. She reiterated the US position in front of Prime Minister Gilani and Chief of the Army Staff General Kayani to remove the safe havens of the terrorists that pose a continuing threat to peace and stability across the border.

Some might think that Pakistan and the US have come to an understanding over the issue of the Haqqani network and that the relations between the two allies are going to come back on track. However, this does not appear to be the case. The Pakistani military leadership seems still adamant. It has not changed its stance on the US demand that Pakistan must stop its support to and launch an operation against the Haqqani network. On the contrary, the military seems well aware of its strategic importance in the war on terror and knows that the US cannot sufficiently sustain anti-al Qaeda/Taliban efforts in Afghanistan without its assistance. Of course the military’s interest in Afghanistan is obvious. It seeks to maintain the policy of strategic depth against any threat from the east.

Amid anti-Pakistan sentiments in the US Congress, the State Department still wants to salvage relations with Pakistan. Mrs Clinton’s visit is part of her government’s efforts to keep pressing Pakistan until it plays the desired role in the war on terror, facilitating the US objectives in Afghanistan before its complete withdrawal in 2014. The US is concerned that the gathering forces of the Taliban in Kunar and Nooristan provinces under the patronage of the Haqqani network would not allow the Kabul government to achieve stability in the post-2014 scenario. Unfortunately, none of the two parties in the latest meeting — Pakistan or the US — has moved an inch from their respective standpoints, frustrating the hope of resolving the impasse between the US and Pakistan. There is even a possibility that the US tone would grow harsher if its soldiers continue to die at the hands of the terrorist Haqqani network.

This entry was posted in + All - Archivio, Analisi, Analysis, War crimes. Bookmark the permalink.